Legend of the Captain's Daughter

(D) The ship went down in the icy water, captain he cried: where is my daughter?
Put her in a lifeboat, she must go (A7) free
Tie my body to the masthead, I would rather see myself dead
Than to see her drowning in the (D) sea

Wild geese were flying low, they saw the sinking ship below
And heard the final cries of the crew
A vigil through the stormy night, but with the dawn no life inside
So onward to the south the wild geese flew

(G) People came from miles around to (D) save some souls, not one was found
And (A7) never did they find the captain’s (D) child
(G) Somewhere off the coast of Iceland, (D) near a fearful rocky island
(A7) Swims a damsel in the ocean (D) wild

Often in the night a-passing, sailors hear a frightful laughing
From the rocks, a-warning to stay clear
And some folks say it is a maiden, all alone and still forsaken
Waiting for the angels to appear

So if you sail in the northern water and you meet with the captain’s daughter
Leave her golden apples, one, two three
And do not cast away your eyes and do not speak to her with lies
Else you will never leave the Iceland sea


And time is now and will be long ago
Gepost door Kasper op 10:40 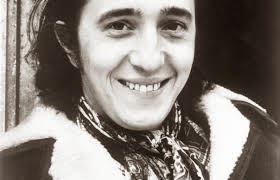